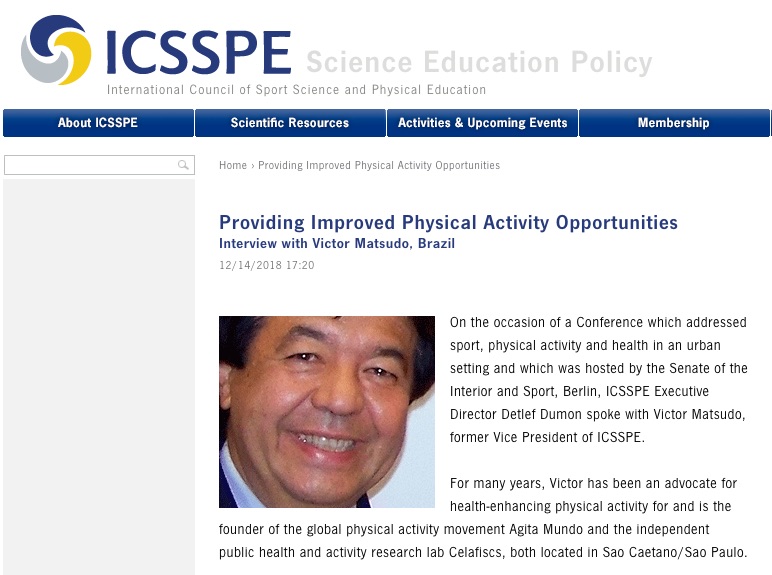 On the occasion of a Conference which addressed sport, physical activity and health in an urban setting and which was hosted by the Senate of the Interior and Sport, Berlin, ICSSPE Executive Director Detlef Dumon spoke with Victor Matsudo, former Vice President of ICSSPE.

For many years, Victor has been an advocate for health-enhancing physical activity for and is the founder of the global physical activity movement Agita Mundo and the independent public health and activity research lab Celafiscs, both located in Sao Caetano/Sao Paulo.

1. You were always very hesitant about promoting physical education and sport. Instead, you favoured the promotion of physical activity. Do current initiatives, such as World Health Organisation´s Global Action Plan on Physical Activity, prove that you were right?

However, at one point I realised that high level sport did have not a commitment with health. I am not talking about recreational sport. For example, when a family plays volleyball and someone falls on the ground trying to catch the ball and they all laugh, that´s great for health, mental health, biological health, social health. Recreational sport is great, it is wonderful, we can take advantage of it to promote health. But my medical perspective cannot agree that high level performance is the way to promote health.

We have to improve and align our activities in and for the future, to get a better conversation among strong institutions around the world, to establish the strongest physical activity agenda possible. Thinking in a larger context I´m not upset that the UN decided to celebrate its Sport Development Day on the same day as the Physical Activity Day which was initiated by WHO and us, both on April 6, because they are meant to serve the same purpose: You try to move people to get a better health. We just need to organise a better agenda for the future.

Unfortunately, WHO, about 25 years ago was in good shape under the direction of Gro Harlem Brundtland. But after that they lost their team and WHO became weaker and weaker in our field of interest. They are just talking about epidemiology and about numbers instead of touching the right topic which should be physical activity promotion. That´s my point.

With Fiona Bull, I have the impression that WHO is getting back on track. She has done much more in these two years than what was done in the past ten years. This new start is what WHO needs, being the strongest agent in the health section world-wide.

2. How do you consider the potential of WHO´s GAPPA, the Global Action Plan on Physical Activity? Does it have the potential to be a reference document for national policy revision?

The Global Action Plan is really good with regard to physical activity promotion because everything is listed, everything is touched. However, the question is how to implement recommendations, what shall countries like Germany and Brazil, what shall organisations like ICSSPE do to implement these? For me, this is the weakness of GAPPA. Everybody knows what to do, but nobody knows how to do it. That´s the problem!

3. Should WHO give more ideas for the implementation?

Sure, I think it would be wise to produce a second annex for GAPPA and give more recommendations with regard to implementation. I know this is not easy, physical activity is easy to define and to measure, but very complex when it comes to implementation.

4. Do you think that sport and physical education can help to promote Physical Activity or would they need to go through changes beforehand? What would need to be changed?

5. It seems that the evidence with regard to the benefits of physical activity is on our side. This does not make us more successful in growing participation opportunities in physical education, sport and physical activity. Does this mean we need to change
our message?

We have the physical activity recommendations and they are revisited
every 10 years; hundreds of researchers sit and discuss the publications and try to refine the messages. We have been progressively and constantly renovating and updating these. For example a few days ago the new guidelines were released

We know that physical activity of any duration has an important effect on one´s health. Celafiscs has reacted to this and has started the new campaign “Every step counts”.

We should also use social media and modern devices to reach out especially to children. Of course, you and I are against the idea that kids stay all the time in front of PCs, laptops and smartphones, but we need to use these enemies in our favour and it is very important that we continue updating our recommendations as ICSSPE should update the Berlin Call for Action from 1999 which was the closing document of the First World Summit on Physical Education.

6. If you were looking for a celebrity to give a global testimonial for physical activity, would Michelle Obama have been a candidate you would think of?

Michelle Obama´s programme was fantastic. It was based on scientific evidence. And what I appreciated was that she was convinced it would take two decades until you would see changes within the society, very seldom that a politician thinks that far ahead.
She was very realistic.

And to ensure sustainable change you need to work with other policy areas. We in Agita Sao Paulo try to engage urban planners, the transport sector, housing departments – all these players are very important. And maybe this was a weakness of Michelle Obama’s programme; she did not reach out to these players. But maybe we could approach her again.

However, there are other current initiatives that promote physical activity, such as a new community programme launched by WHO and the Active City programme which is supported by the IOC. Furthermore, I am on the editorial board for obesity of Lancet and for the coming volume we plan to focus on climate change and its effects on obesity and malnutrition. I can ensure you that climate change is an important topic on our agenda. As you can see there are many ways to work towards our goal, a physically active and healthier world!